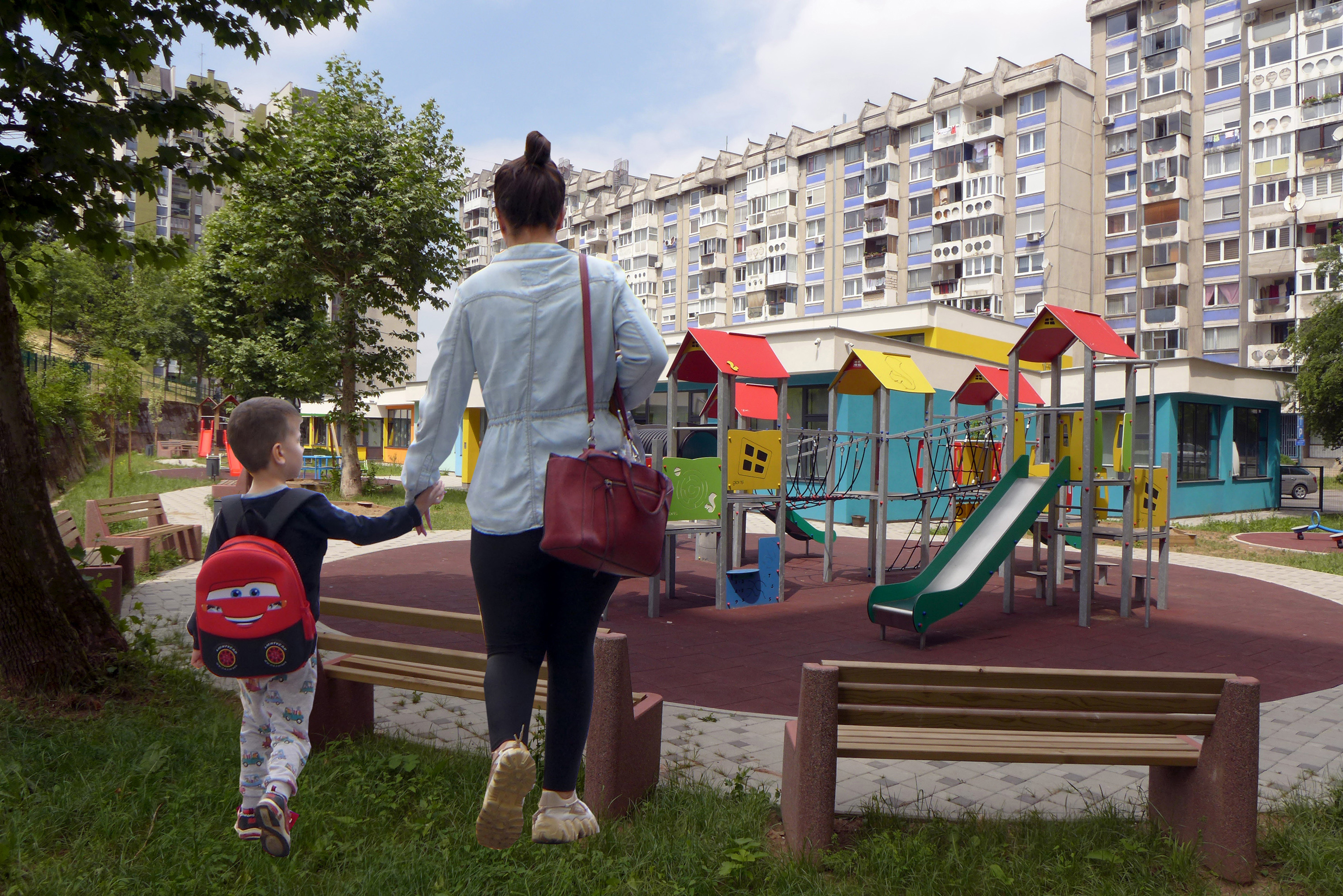 At the moment, the procedure for electing a new director is underway. It is interesting that only three applications were received, one of which is incomplete. The other two were sent by the current and former directors, but neither of them, according to the established position of the KS Government (or at least part of the government), is the happiest solution

The Prosecutor’s Office of the Canton of Sarajevo opened a case in connection with several years of illegal employment in the Public Institution (PI) Djeca Sarajeva based on the report and documentation of the Office for the Fight against Corruption and Quality Management of the KS.

The information was confirmed to Inforadar from both of these institutions after our journalistic teams conducted several weeks of preliminary research based on information obtained from several independent sources.

“Regarding your inquiry, we inform you that the mentioned case is in the phase of checking the allegations from the application and that it is being intensively processed in order to determine whether there are elements of a criminal offence. In connection with the above, when the prosecutor’s decision is made, the public will be informed in a timely manner”, the Prosecutor’s Office replied to our portal. 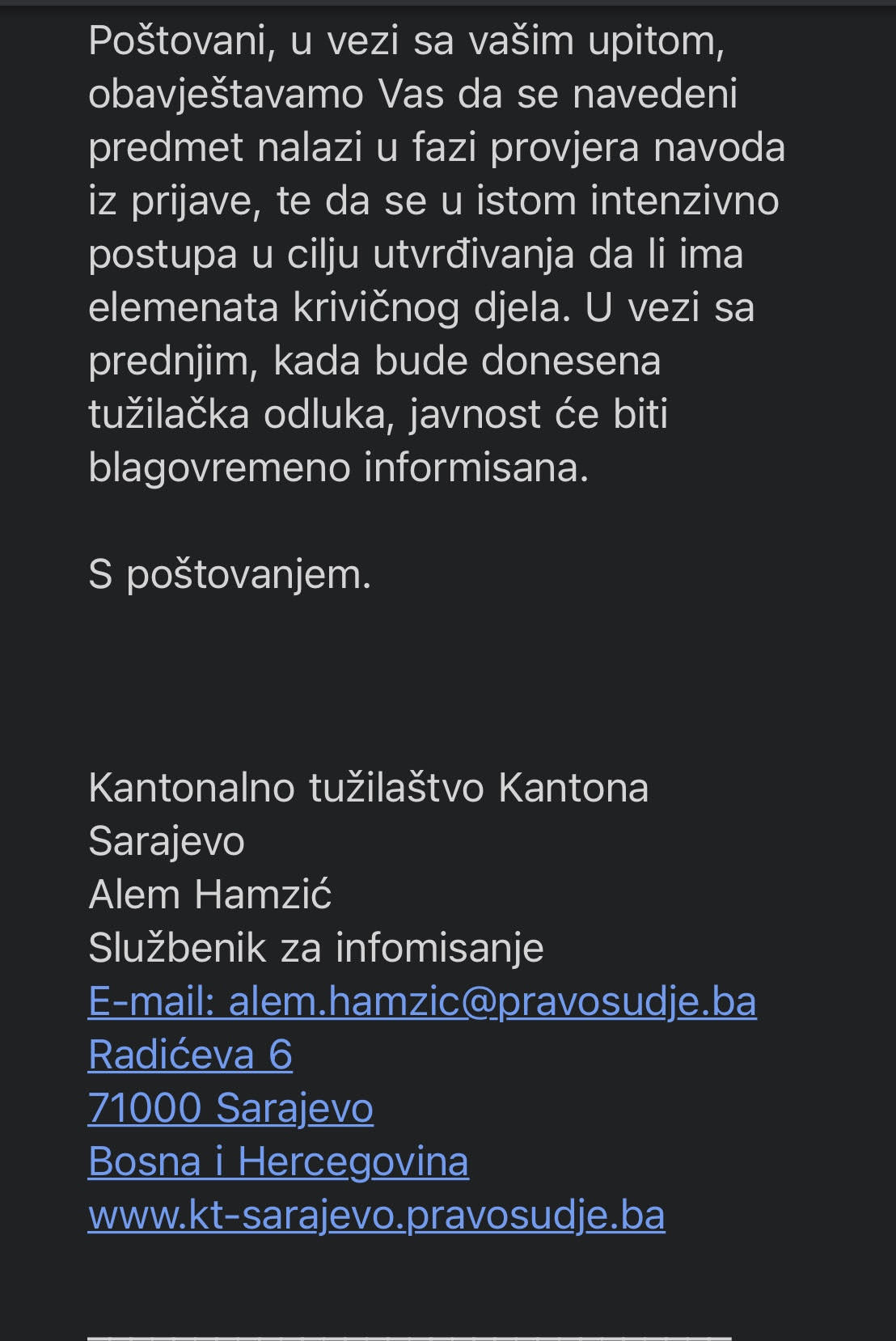 At the end of 2021, the KS Office for the Fight against Corruption and Quality Management, in cooperation with the Cantonal Administration for Inspection Affairs, carried out checks based on several received reports of irregularities in connection with the employment of a large number of persons in the Djeca Sarajeva PI. The head of this Office, Erduan Kafedžić, in his reply to Inforadar, states that during 2021, illegal employment was continuously carried out in this institution. So, no competitions have been held.

“During the inspection and verification process, it was established that in 2021, fixed-term employment contracts were concluded with a larger number of workers (58 in total) in the public institution ‘Djeca Sarajeva’ on the basis of the Decision/s of the Management Board on giving consent to the director for the conclusion of a fixed-term employment contract without a public competition, which is contrary to the provisions of the legal and by-law positive legal regulations that regulate the procedure for employment in public institutions”, Kafedžić told our portal. 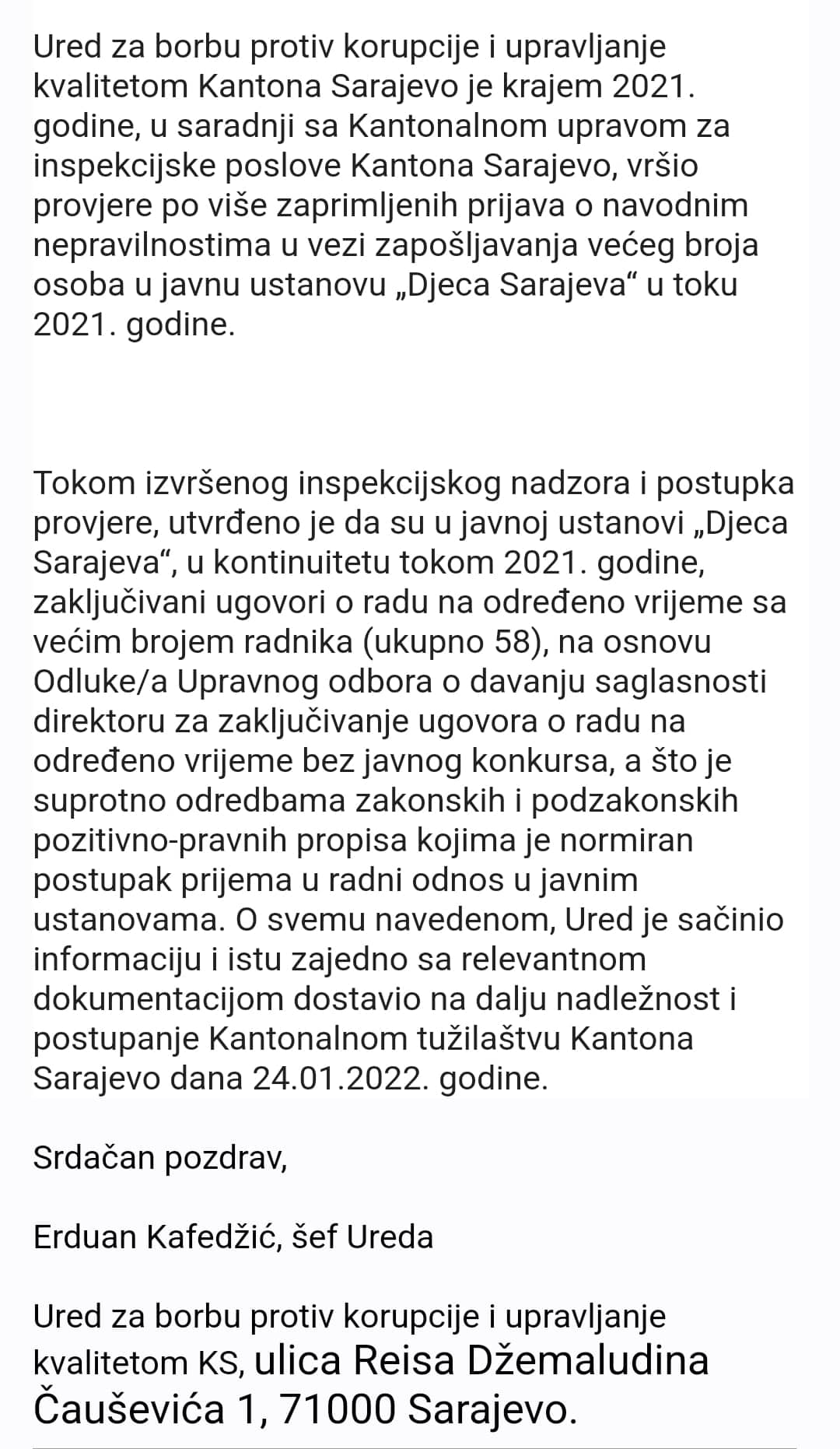 Photo: The response of the head of the Office for the fight against corruption to Inforadar 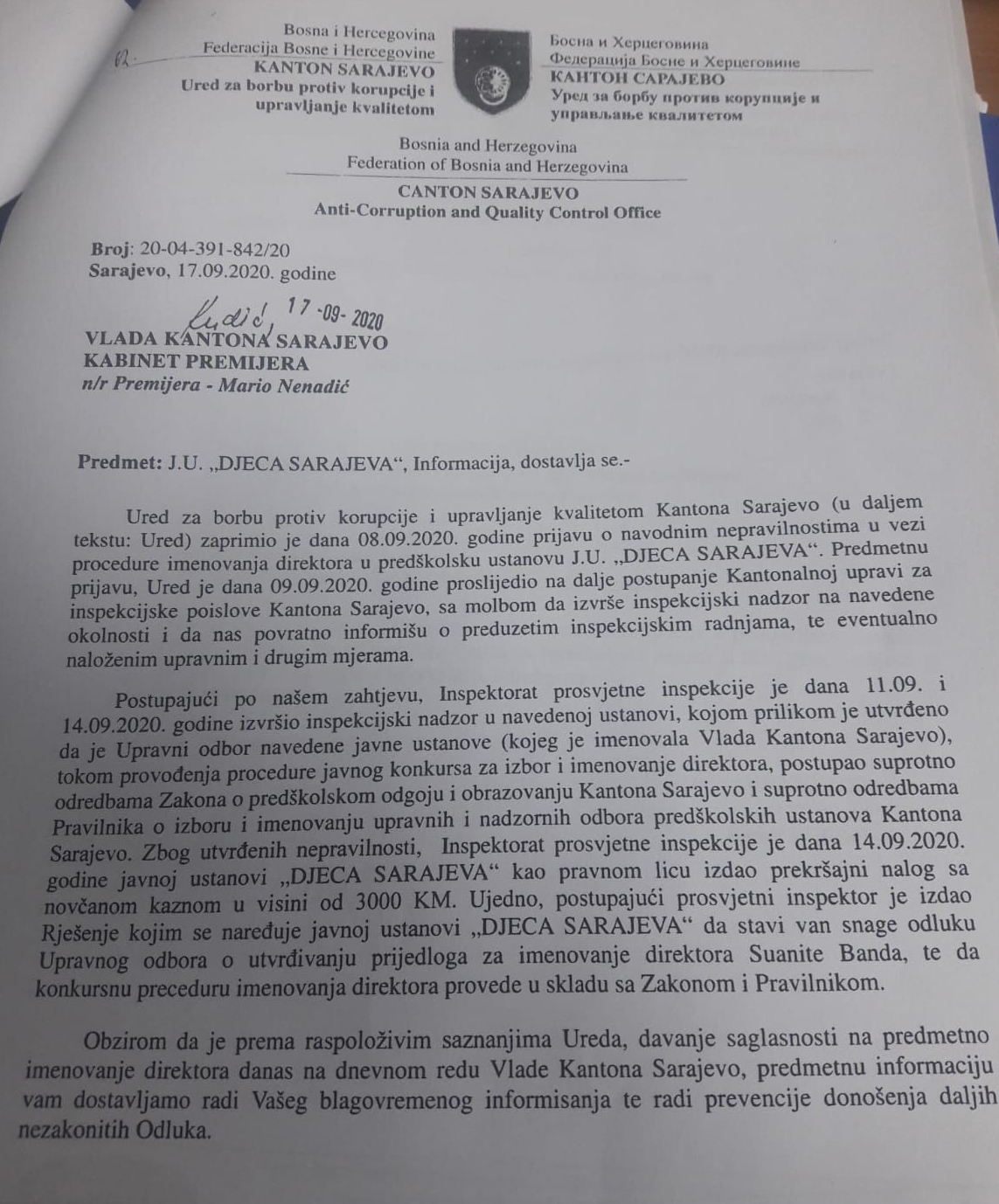 However, major irregularities in employment in the Djeca Sarajeva PI were suspiciously registered much earlier; in the audit report for 2020, it was stated that PI Djeca Sarajeva, without the mandatory competition procedure, concluded contracts with 53 people. This fact undoubtedly points to the conclusion that it is about corruption, nepotism and the employment of party cadres.

As followed by the report, the damage caused to the budget of Sarajevo Canton amounts to at least 106,000 KM per month. By rough calculation, the damage to the cantonal budget over the past 19 months amounts to approximately two million KM. 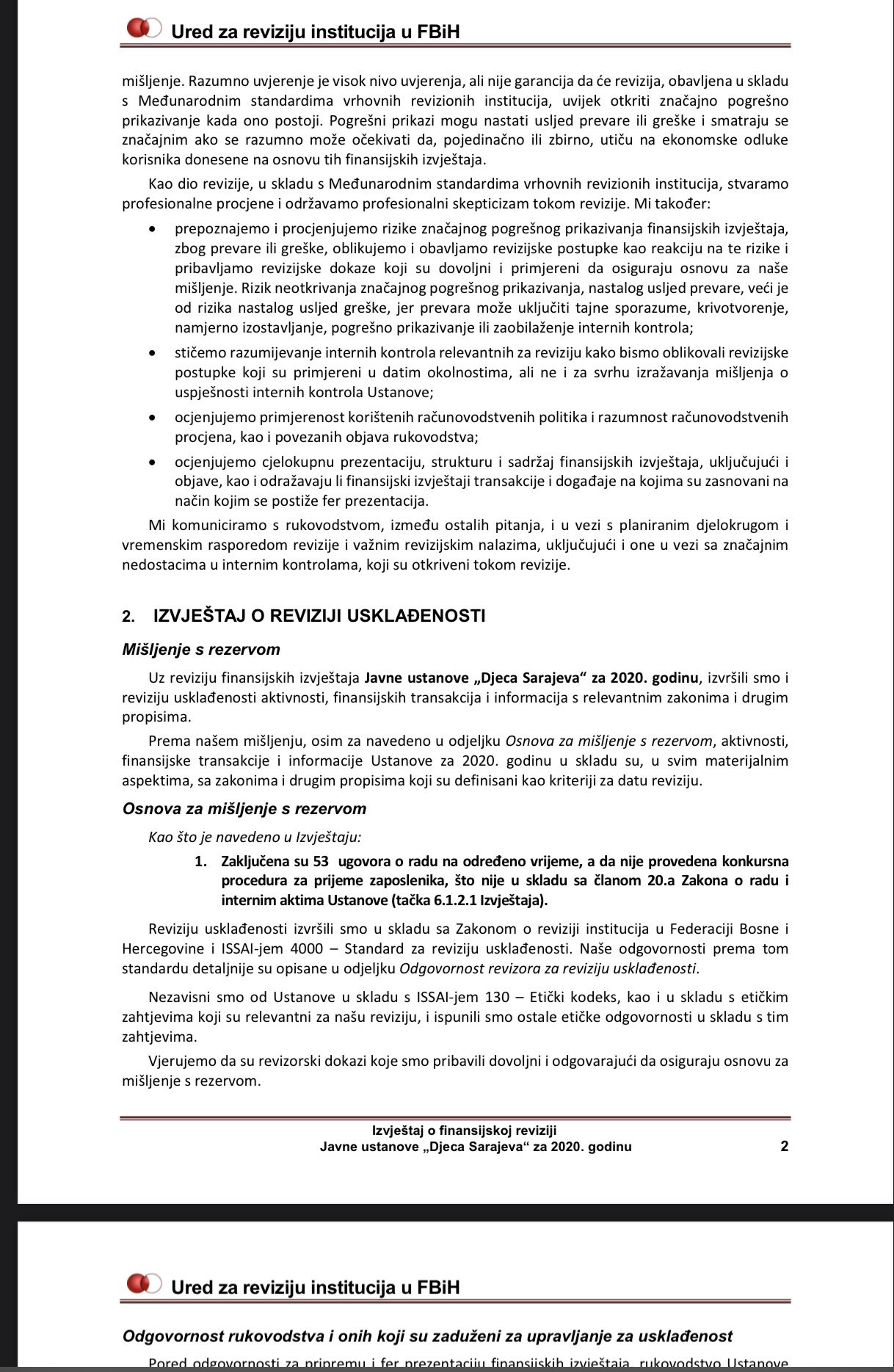 Photo: Facsimile of part of the auditor’s report

The kindergartens in question are:

Ministers of education and mayors of municipalities also appeared at the opening, from which it follows that they themselves knew that there was a public call for the enrollment of children, but not a public call for the admission of new employees. If we take into account that in four out of five of these kindergartens there are six educational groups each, and in Bulbuli three educational groups, it is clear how and in what way 58 teachers were hired (according to the audit report, 53). Without competition, and on the basis of eligibility and party connections.

SOAP SHOW AND TELENOVELA ALL IN ONE

Cooks and housekeepers should be added to this number so that the total number of hired employees hired illegally is at least 70! It has been confirmed to us from several sources that in the period from January 1, 2020, to the end of April 2022, more than 100 new employees were hired without competition!

On November 5, 2019, the board of directors of PI Djeca Sarajeva dismissed Jasmina Čongo from the position of acting director of this institution. She has been performing this duty since 2015. Čongo was close to SBB and during her mandate, she established a system of services and trading of influence. 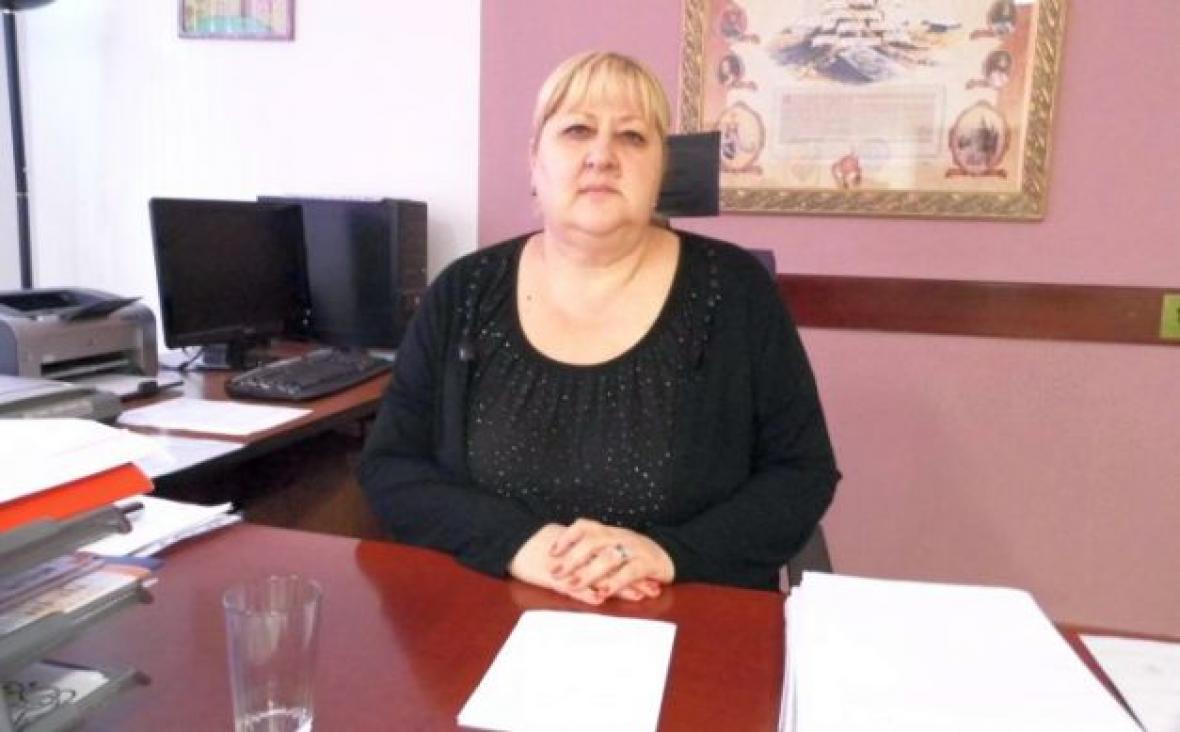 Amela Buljubašić was then appointed as the new acting director. The KS Government at the time (the SDA government before the so-called šestroke) did not implement the competition procedure and the competition by which Buljubašić was selected as director was never completed. However, based on the statements made in the minutes of the previous convocation, the Government concluded that a new acting director should be appointed and that Čongo should be dismissed.

This happened in the way that the Board of Directors of PI Djeca Sarajeva sought the consent of the then Minister Zineta Bogunić (NiP), on the basis of which Amela Buljubasic was appointed acting director of this institution, and Jasmina Čongo was assigned to her old post of educator. The plot follows after the then SDA government (so-called Friday the 13th) dismissed Buljubasic and appointed Suanita Banda, although both the inspection and the Office for the fight against corruption warned that her election was illegal. However, the then Acting Prime Minister Anis Krivić (SBB) insisted on her enthronement.

The culmination after years of chaotic conditions in PI Djeca Sarajeva takes place after the Board of Directors, on the proposal of the current Sarajevo Canton Government (troika government), prematurely dismissed Suanita Banda and appointed Alma Trnka as the acting director of this institution. 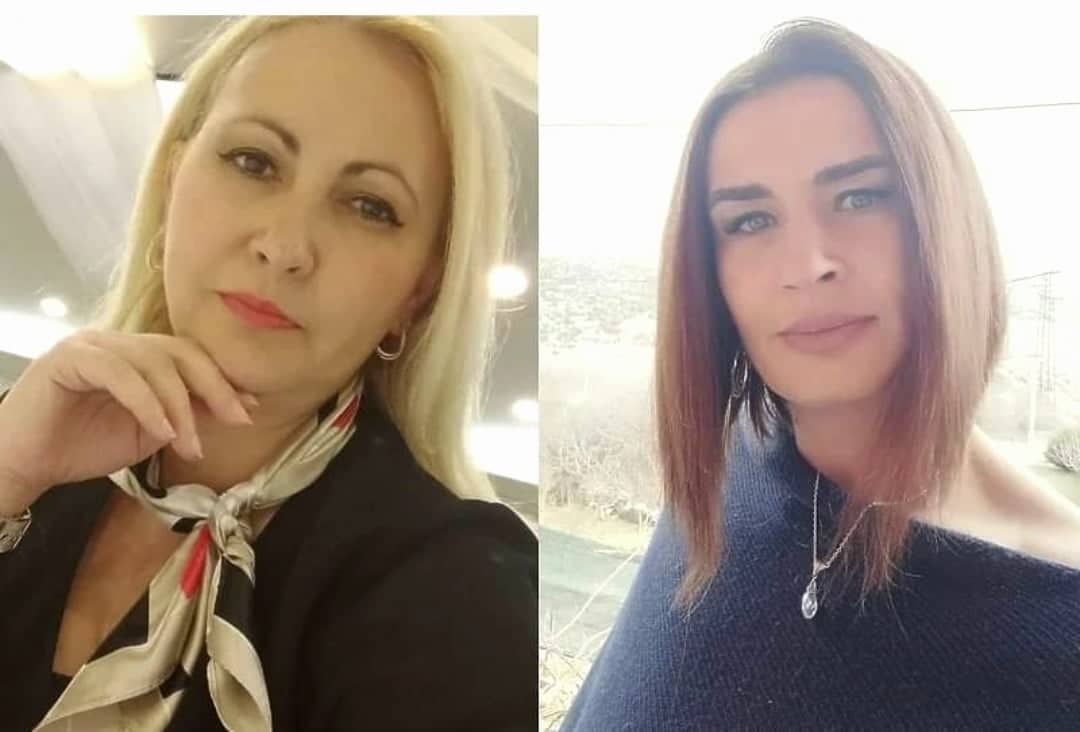 At the moment, the procedure for electing a new director is underway, and as we know, Trnka is delaying the election of a permanent director because it has equally ambitious competition. It is interesting that only three applications were received, one of which is incomplete. The other two were sent by the current and former directors, but neither of them, according to the established position of the KS Government (or at least part of the government), is the happiest solution.

Trnka herself confirmed the rumours about herself, because she did not even answer our questions about the events in the institution she manages.

We received answers to our questions from the Government of KS.

“Previously, the management did not comply with the provisions of the Ordinance regarding employment. The current management of PI “Djeca Sarajeva” was guided by the provisions of the Ordinance when announcing the aforementioned competition for hiring employees. Both old (internally transferred) and new employees work in the newly opened kindergartens,” the Government stated, among other things, in their response.

They stated that the Government also received an act from the Office for the Fight against Corruption, in which it was just confirmed that the mass recruitment of female educators was carried out without competition.

HOW THE UNION AND THE MINISTER IMPLEMENT DISCRIMINATION

We remind you that a year and a half ago, the Ministry of Education of the KS adopted the Rulebook for the admission of new employees in preschool institutions, and primary and secondary schools in the KS. The trade union had the opportunity to analyze that rulebook and submit its suggestions. The rulebook was published in the Official Gazette of the KS.

In the meantime, the Independent Union of Primary and Secondary Education KS spreads rumours that (illegally employed) employees will lose their jobs and insists that the recruitment of new employees at the PI Djeca Sarajeva is not carried out according to the Rulebook adopted by the Ministry of Education and accepted by the union itself, but according to the Regulation for the admission of new employees in the public sector in KS.

In the meantime, their request was accepted by the Ministry itself, which is headed by Naida Hota-Muminović (NiP), stating that the competition refers to the employment of teachers who are already working (!?), which on the other hand discriminates against people in the bureau. 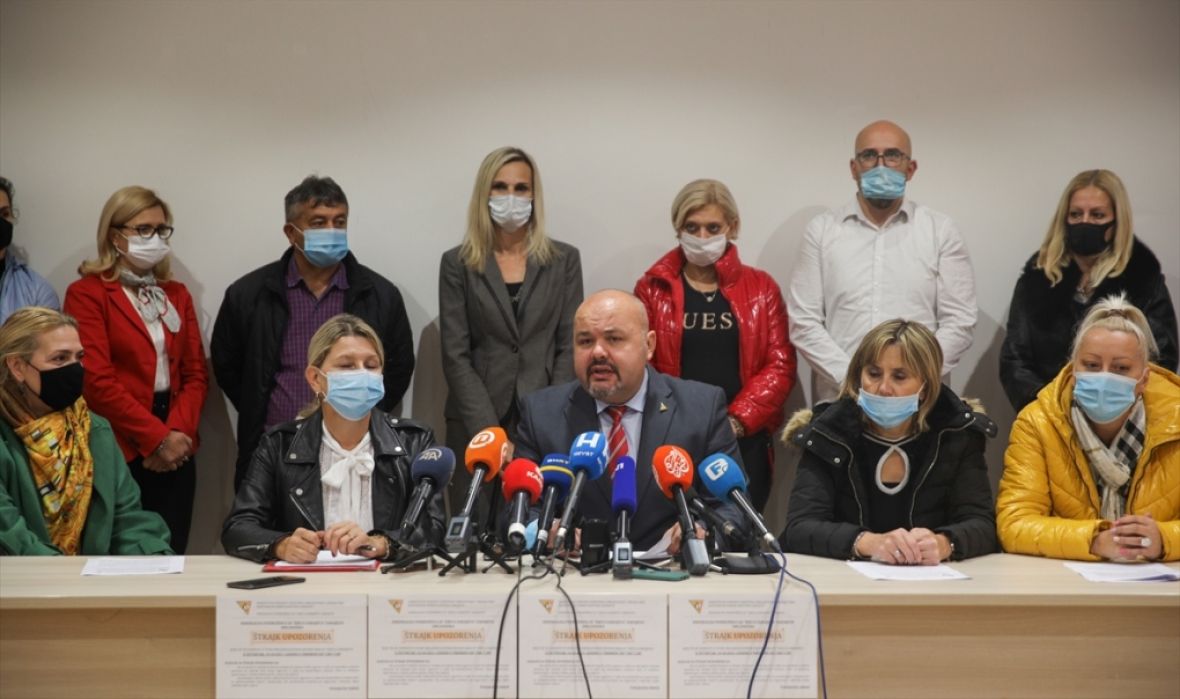 Photo: The union at the press conference when the strike was announced at the end of last year

The union claims to Inforadar that the Preschool Education Act “did not provide for the admission of workers based on the Ordinance, as is the case for primary and secondary schools, but in accordance with the Labor Act”.

“The Labor Act only defined in 2018 that the hiring of workers is done in accordance with cantonal regulations. After that, the Government passes a Regulation that is in direct conflict with the Rulebook and vice versa. This is one of the reasons why the Trade Union asked the Ministry to exempt the “Djeca Sarajeva” PI from the Ordinance, so that the “Djeca Sarajeva” PI could finally hire workers in a completely legal manner, and this is exactly what has been happening in the last month. On the other hand, the Ministry and the Government have for years refused to enable the recruitment of workers through competitions, especially open-ended competitions. Signing contracts for three months and extending them and terminating them before the contracts grow to an indefinite period was a necessary practice that all the directors of PI ‘Djeca Sarajeva’ were forced to do because there was no other way to prevent the work of PI ‘Djeca Sarajeva'”, claims the union.

It is an open secret, on the other hand, that the Trade Union in PI Dceja Sarajeva has a free hand, because in primary and secondary schools the Ordinance on hiring employees is respected, where there are also a large number of directors (whom the union cannot influence), while PI Djeca Sarajeva has only one director and he can always be manipulated.

What is the difference – it is easy to conclude. If the recruitment of new employees were to be carried out according to the Ordinance that the Ministry of Education passed, points would be given to candidates for the period spent at the office, work experience and other things. According to the Regulation according to which the competition is currently being held – there is no scoring, which automatically eliminates all potential candidates who are currently unemployed. 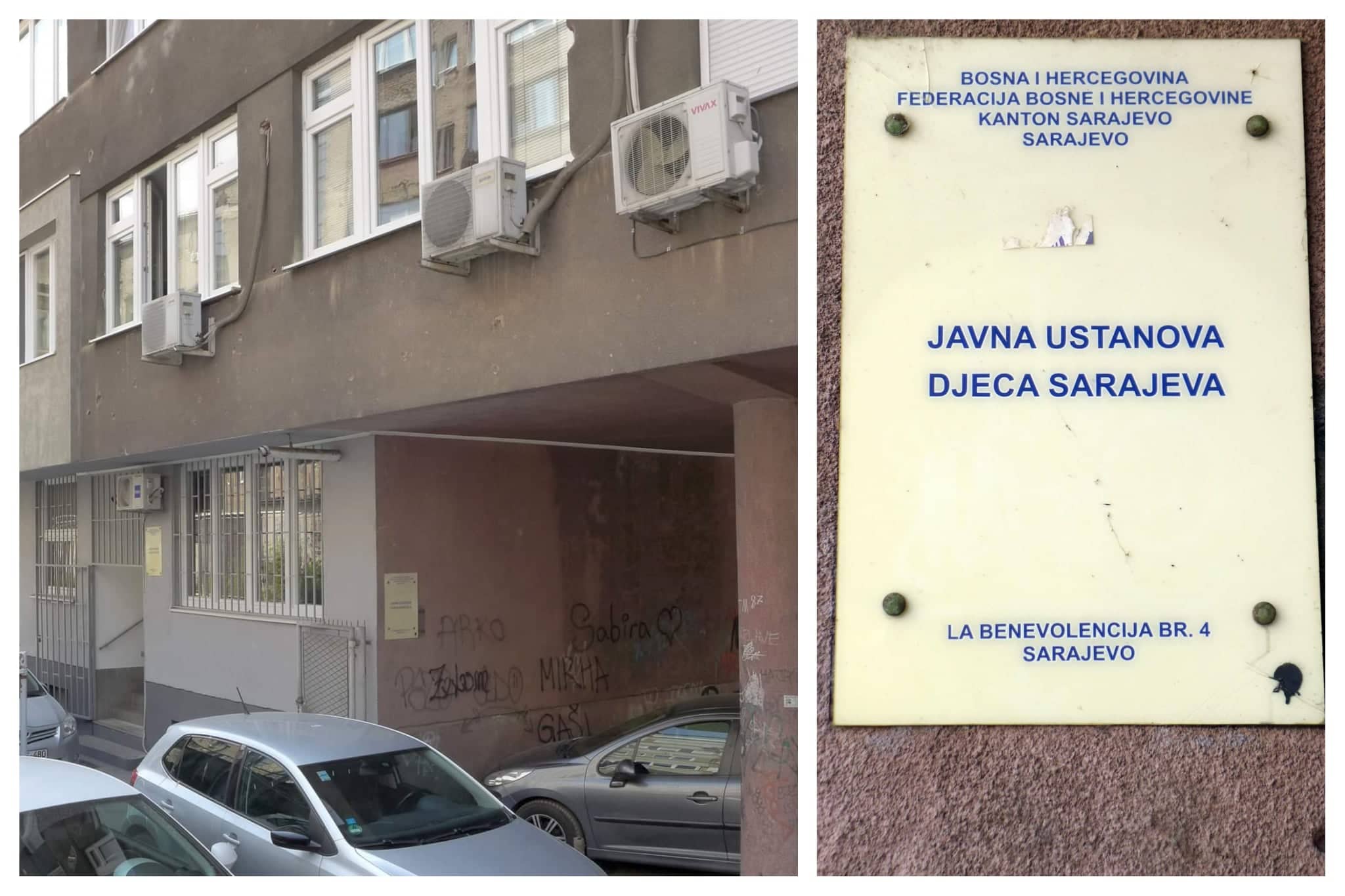 This makes it obvious that the Union put pressure on the Ministry, wanting to protect employees from these kindergartens who were hired “in the office”, which is an obvious example of corruption, nepotism and undoubtedly (at least partly) party recruitment.

Otherwise, according to all input information, it is extremely difficult to manage PI Djeca Sarajeva because the Board of Directors consists of two educators, two parents and only one person appointed by the Ministry. The practice has shown that the director lobbies the educators who in turn lobby one parent each and thus establishes a majority.

The Fortina Government states that in 2019, they demanded the admission of 100 new educators per the competition, and this additional 60 in order to stop the illegal practice in the institution where it should not be.

“The activities of the Office for the fight against corruption and quality control of the KS have already been institutionally responded to in such a way that the competent prosecutor’s office is informed about all recorded irregularities. Further, it is up to the Sarajevo Canton Prosecutor’s Office to carry out the proceedings against the responsible persons. When it comes to the activities of the KS Government in this context, the Ministry of Education carried out supervision over the legality of work in the field of employment and the aforementioned irregularities were recorded”, the Government of Sarajevo Canton pointed out.

We remind you that the problems in this institution have been going on for several decades and that the management has been dealing with party interests instead of children for years. As an example, everyone knows the attempt to introduce religious education in Sarajevo kindergartens during the mandate of director Arzija Mahmutović and SDA minister Safet Keša. 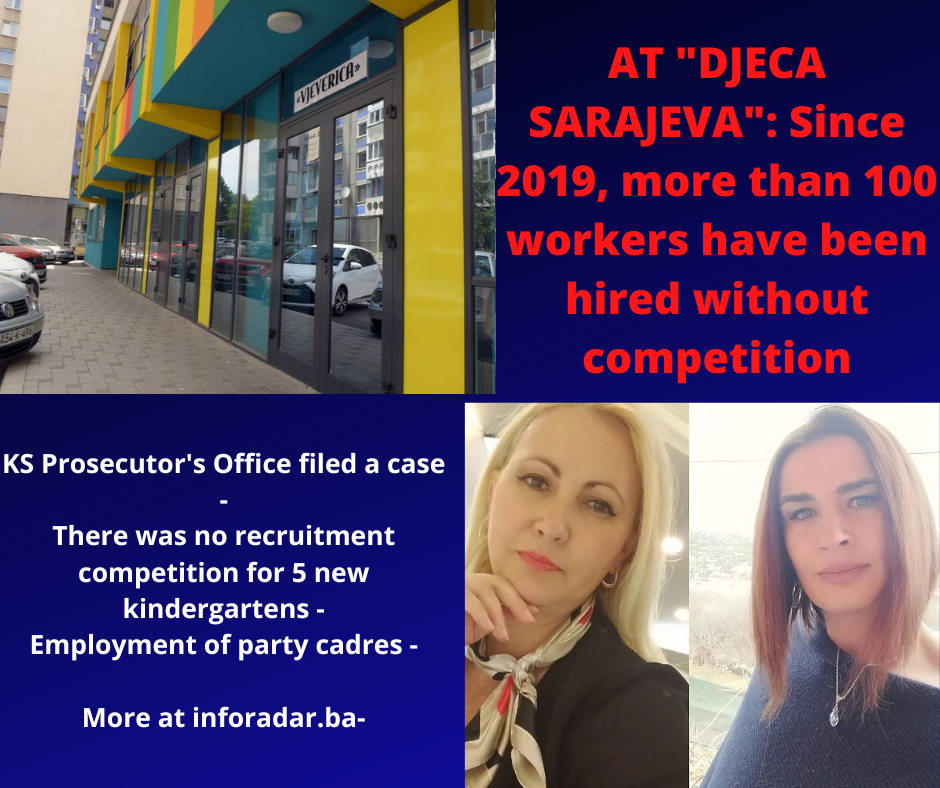