Naslovnica Društvo WAR FOR THE DEAD: A million-dollar monopoly over the deceased from...
Podjeli
Facebook
Twitter
Google+ 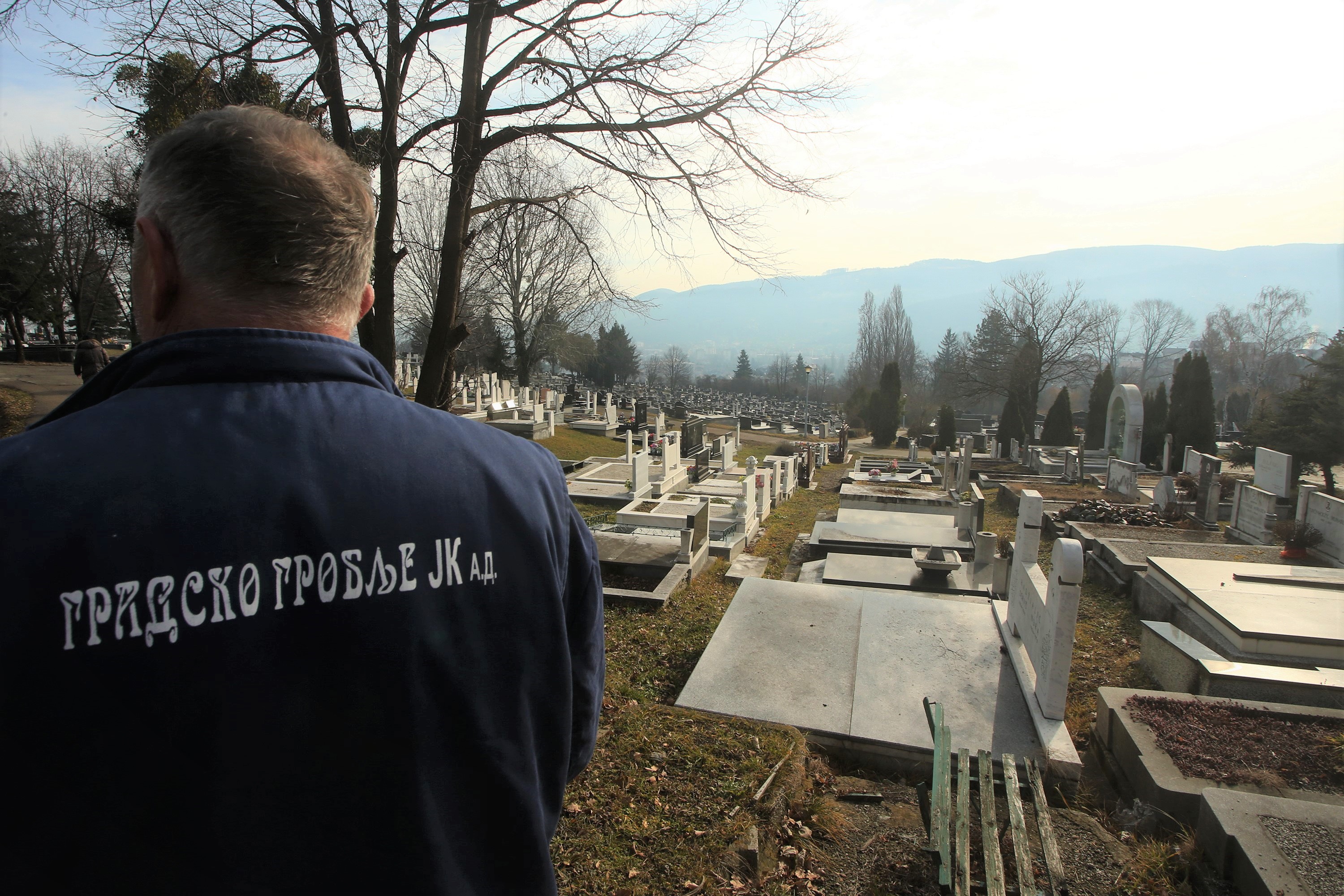 The fact that a family has to pay two average salaries to bury a deceased family member without knowing who is being buried – because coffins are not allowed to be opened – would provoke a general civil revolt and reaction of the rule of law in any well-organized society. Not in BiH, a corruption-ridden country.

Since the beginning of the pandemic, with the final date of collected data being December 23 this year, 5,444 people have died from the coronavirus in Republika Srpska.

Although, according to experts, the virus dies when the infected does, all those who died in RS, in accordance with the rules from 2018, must be buried in tin boxes that cost 260 KM each, so we can reach the amount of 1.4 million KM by simple mathematics, which families paid only for these purposes, or a total of about seven million for the burial of the deceased from COVID 19.

What is most tragic about everything is that the funerals of the deceased from the coronavirus are manipulated, since only privileged funeral companies can perform those services, that is, sell funeral equipment. Thus, for two years now, all the money has gone into the pockets of individuals who are justifiably suspected of exploiting loopholes in the law and engaging in pandemic profiteering in order to earn hefty profits.

THE FAMILY DOESN’T KNOW WHO IS BEING BURIED

On the other hand, private funeral companies, which are not in on the “deal”, complain and openly warn that individuals have a monopoly over this type of burial, but despite that, the authorities deny any illegal actions, referring to the mentioned Rulebook.

Although we sent inquiries to numerous institutions, including the Republic Headquarters for Emergency Situations of the RS, in order to establish the exact facts related to the procedures of burying the dead from the coronavirus and visible profiteering, we did not receive an answer from any (!), Which speaks for itself. All the more so because it is completely clear from the documentation in the possession of Inforadar that this is a gray area where individuals take extra profit, and those responsible, or those who should be – wash their hands of responsibility.

Dragan B. from Banja Luka lost his father at the age of 69 due to the coronavirus, but when he went to arrange the transport of the deceased, he was surprised by the procedure which, as he says, tied his hands from the start.

“I received a telegram from the University Medical Center Banja Luka informing me that my father had died of coronavirus. Apart from the shock we went through due to the loss, there were several additional shocks, because we didn’t even know what the procedure was in such situations “, says Dragan B for Inforadar, who did not want his full identity to be revealed.

Even though he intended to hire a private funeral company in Banja Luka, because he had good recommendations, he received information that only JK Gradsko groblje a.d. Banja Luka is burying the deceased from the coronavirus.

“The biggest shock for me came when they told me that at no time could I see who was in the tin casket already sealed in the UCC of Republika Srpska. So, at no time do you have the opportunity to determine who you are burying ?! You can allegedly do this only a year after the funeral, with a request for exhumation. I couldn’t believe what they were telling me and it burdens me more and more as time goes by since the funeral “, says Dragan indignantly.

He says that he was obliged to choose a tin casket in the City Cemetery.

“They told me that the deceased from the coronavirus must be in tin caskets, and you can choose those caskets only in the premises of the Banja Luka City Cemetery, the price of one is 260 KM. At that price, you pay 80KM for casket sealing, and then for issuing a certificate 18 KM, that is two, three papers, while for the service of bringing the deceased into the vehicle an additional 11 KM. These are not the amounts for which someone will go public, but precisely because the people are silent, they are ripping them off. Now that I add it all up, the only thing that the families of those who died from the coronavirus do is pay a specific company and not watch who is being buried. I am convinced that this situation is only in our country, in such a country that lives with corruption on every corner “, concludes Dragan B.

1400 KM FOR BURIAL OF THOSE WHO DIED FROM THE CORONAVIRUS

Persons who died from the coronavirus are buried in accordance with the Rulebook, which was adopted in 2018, when Dragan Bogdanić was the head of the RS Ministry of Health, on the manner and conditions under which burial, exhumation, and transport of deceased persons is done. This ordinance replaced the previous one, which stated that the infected person should be buried in a health-autopsy bag.

Although medical experts point out that after the death of the person – the virus dies with him, according to this rulebook, those who died from the coronavirus are buried in soldered metal caskets, which are then placed in a wooden casket. This type of funeral costs the family around 1,400 KM on average.

Preparing the deceased person is performed by the health institution where the person died. The exhumation can be done only a year after the burial, so it is also the first opportunity for the family to check who they buried.

The body of a person who has died from coronavirus is treated separately and taken to a specially prepared morgue. However, nowhere in the ordinance is it specified which funeral company is allowed to bury the dead from infectious diseases. Inforadar’s interlocutors remind that even before the Covid-19 pandemic, buried people died of other dangerous and contagious diseases, such as hepatitis, ie AIDS, but that there was no monopoly on the part of one company at that time.

And the company that has a monopoly over this type of burial is the Banja Luka City Cemetery, as witnessed by the owner of the funeral company Duga, Milan Štrbac.

“There is no decision that only this company is assigned to bury the dead from coronavirus and sell the equipment. This has endangered small businesses, and there are not many of us. I no longer have the strength or the will to fight, but what is being done has nothing to do with logic “, claims Štrbac. He states that he did not react at the beginning of the pandemic, believing that the state of emergency was a time when irrational decisions were made.

However, as the state of emergency was abolished a long time ago, and the principle of work, ie the monopoly over funerals, remained unchanged, he addressed several institutions.

“Among the relevant institutions was the UCC RS. From their answer, it is clear that they have never specified which company will sell tin and wooden caskets, but are exclusively guided by the manner and procedure in cases of deaths from coronavirus. “I am now interested in how it is possible that in cases where someone dies from natural causes or otherwise, works normally, and in cases of death from coronavirus, only the ‘City Cemetery’ has a monopoly on burying the dead,” said Štrbac, adding that his company was also engaged in conducting funerals of the deceased from coronavirus in other cities, including EU countries, which leads him to the conclusion that the City Cemetery of Banja Luka on its own initiative and illegally obstructs and denies the citizens right to choose.

However, the director of JK Gradska groblja a.d. Banja Luka Željko Grbić rejects any possibility of corruption and monopoly in cases of burial of persons who died from the coronavirus, although he confirms that only they perform this type of burial “on the basis of a contract signed with UCC RS on taking over the deceased “.

“There is no corruption here, everything is clearly written in the Rulebook. There are no privileged companies that sell metal caskets, because we do it according to the principles of commission sales. We have the option of several companies that display their caskets and it is up to the citizens to choose, and when they pay them – we forward the money to these companies “, says Grbić, adding that the margin is the same for everyone.

Grbić claims that only the Gradsko groblje in Banja Luka can bury the dead from the coronavirus and that only they have mortuaries specialized for that purpose, while some keep the dead – in containers.

However, it is interesting that the Gradsko groblje only recently (December 17, at the time of researching this story) published a public invitation to other funeral companies to, if they have offers for the sale of funeral equipment for the deceased, deliver them to the address of this public company.

The director of the Gradsko groblje says that he also addressed the Public Procurement Agency because of the roll call, from which they confirmed that no tenders are being announced in this particular case – because it is a commission sale.

Unlike most of the citizens of this country, and especially the saddened families who have lost one of their household members since March 2020, the coronavirus pandemic, as confirmed by this story, for individuals and interest groups with political background is undoubtedly used for personal enrichment and profiteering of the worst kind.

The fact that a grieving family has to pay two average salaries to bury a family member without knowing who is burying them – because coffins are not allowed to be opened – would provoke a general civil revolt and reaction of the rule of law in any organized society, but not in BiH, a state shackled by corruption and left at the mercy of ethno-national leaders, their clans and semi-illegal affairs.

Is there any crime in the construction of the highway near Zenica: Exploding costs for the section Vranduk – Ponirak!

Is there any crime in the construction of the highway near...