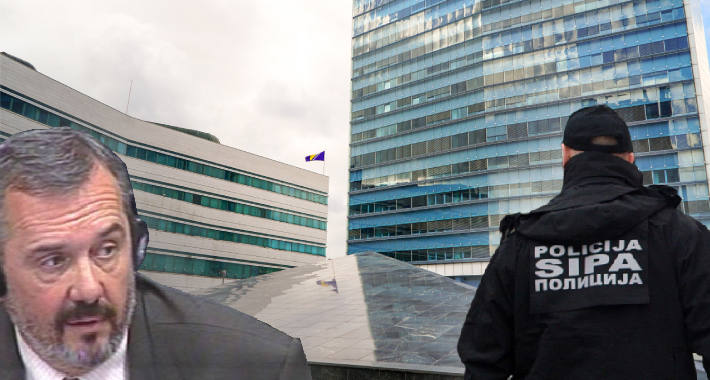 Dragan Šojić, director of the Service, claims that he does not know why SIPA came to the premises of this institution and talked to certain employees, while Šojić’s deputy Dragan Slipac says that “there are some irregularities within the Service which are being investigated by SIPA”. Sojic does not want to answer the question of whether he is travelling to Serbia in an official car on Thursday to see his wife, who allegedly escaped from serving a prison sentence in BiH, because he considers that these are “private issues”

The Service for Joint Affairs of BiH Institutions (SZPIBiH) did not procure sufficient quantities of heating oil on time for this year, so the institutions were left without heating in the middle of winter, and calls for other public procurements were cancelled for various reasons. This obviously does not worry the authorities in this service too much, because they are amused by other, internal problems in this body whose competence is to take care of the smooth functioning of all other state institutions.

However, those responsible for numerous irregularities suspected in this service could soon be “given a headache”, because, as Fokus finds out, the business and activities of the Service for Joint Affairs of BiH institutions are investigative actions of the State Investigation and Protection Agency. As we have learned, alleged irregularities in employment, public procurement and forgery of travel orders are under the scrutiny of investigators.

Although the recent entry of SIPA into this state body was linked to the disciplinary proceedings against Vladimir Vukša, Head of the Department for Legal and General Affairs in this service, which Fokus has already written about, it seems that the reasons for SIPA’s entry into the Service for joint affairs of BiH institutions are on a much wider and more serious scale than what was originally made public.

The services for joint affairs of BiH institutions in connection with the report against Vukša, replied that “the State Investigation and Protection Agency cannot provide information on its specific operational activities.”

We also asked the Prosecutor’s Office of BiH if they were aware of this case, to which they replied that they could not comment on individual cases.

In the meantime, Fokus received information from well-informed sources that the “trigger” for SIPA’s entry into the Service was the report against Dragan Šojić, Director of the Service.

Šojić has been reported to have been travelling to Serbia by official car every Thursday for three years to visit his wife, who allegedly escaped from a prison sentence in BiH for participating in a fatal car accident.

According to our sources, Šojić justified his absence from work on Friday with false travel orders issued for destinations in BiH, and travel orders for Šojić should have been written retroactively in recent months, but this was thwarted by Vladimir Vukša, head of the Department for Legal Affairs, who drew Šojić’s attention to the fact that certain decisions regarding these trips did not have the signatures of Dragan Slipac, one of Šojić’s deputies.

According to our sources, Vukša’s position that all acts of the Service for Joint Affairs of BiH Institutions must be signed by the director and the signatures of his two deputies led to conflicts with some employees who participated in the retroactive the introduction of Dragan Šojić’s travel orders in the records of the protocol, and according to the claims of our sources, Vukša’s signature was even falsified.

Conflicts between employees in BiH Institutions due to signatures? PHOTO: DB

We also asked Šojić if it was true that the head of the Legal Affairs Department, Vladimir Vukša, refused to participate in the retroactive and illegal justification of his travels, and that Vukša had objections because Šojić’s deputy Dragan Slipac did not sign the travel orders.

We also asked Dragan Šojić to comment on the allegation that the conflict between Vukša and one employee from the legal service occurred because she allegedly forged travel orders signed by the head of the legal service and that the incident occurred when Vukša found out, after which disciplinary proceedings were instituted against him.

We received the following answer to all these allegations, for which we asked Šojić for comment, signed by Danko Govedarica, Public Relations Officer in the Service for Joint Affairs of BiH Institutions:

– Dragan Šojić, as he states, is not in any conflict with the head of the Department for Legal and General Affairs, Vladimir Vukša, and as far as the official vehicle is concerned, he uses the same in accordance with the positive regulations. The fact is that the head of the Department of Legal and General Affairs has no authority to issue travel orders, so this fact is not true – a brief answer from the Service to our detailed questions.

It is interesting that our sources claim that Vladimir Vukša has a close relationship with a prosecutor, and that she was the prosecutor in the case when Šojić’s wife was convicted of a car accident, and that this is allegedly an additional cause of disagreement between Šojić and Vukša.

Despite the fact that he is accused of using his official car for private visits to his wife in another country, when asked by Fokus to comment on these allegations, for Šojić these are “questions of a private nature”, also which was the answer when asked about it.

– Considering that the last two questions are of a private nature, Director Dragan Šojić reserves the right not to answer them – it is stated in the answer to Fokus from the Service for Joint Affairs of BiH Institutions.

In response to another inquiry we sent to Šojić regarding SIPA’s entry into the Service for Joint Affairs of BiH Institutions, he confirmed that the agency’s employees were at the Service’s premises, but that he “does not know what they talked about with individual employees”.

Unlike Dragan Šojić, director of the Service, who assesses private issues and selectively answers them, his deputy Dragan Slipac openly told Fokus that, to his knowledge, SIPA is conducting investigations in that institution and is continuously requesting certain documentation. Slipac has been in the Service since January 1 this year, and before that he worked in the Agency for Prevention of Corruption and Coordination of the Fight against Corruption in BiH.

– You have some irregularities within the service itself. These irregularities are now being investigated by SIPA and the investigating authorities. I can’t prejudge what will come out of that, nor do I know what it is about – says Slipac.

Slipac confirmed for Fokus that he refuses to give consent to any act in the Service that he considers to be inconsistent with the law. Thus, he recently made remarks on the Public Procurement Plan for 2022, because that plan lists the individual names of employees in the Service in charge of each procurement.

SZPIBiH Public Procurement Plan: Deputy Director Dragan Slipac has an objection to the announcement of the name

– I read all the decisions, if they are not completely in accordance with the law and with the office business, I will not sign any such decision. And I will always stand behind it when I don’t sign something. But some other strange things are happening here, I can’t prejudge, until the investigative bodies are finished, since they are already working, I found some irregularities there. I tried to point out and I am pointing out now, and we will see what it will turn out to be in the end – says Slipac.

Slipac claims that he is not in any conflict with the current director of the Service, Dragan Šojić, but he admits that he is facing certain pressures due to his insistence on legality. The Deputy Director of the Service for Joint Affairs of BiH Institutions rejects earlier allegations that he stopped the procurement of heating oil for the needs of institutions by emphasizing certain appointments.

– I’m not in conflict with anyone. People are now trying to put some pressure on me, and I just got here. I’m just trying to point out some irregularities and work according to the law, according to the regulations, what I’ve learned, I’ve worked in the security services for years. They also tried to accuse me of heating oil. That is incorrect, I denied it all, no one published it – says Slipac.

Slipac also believes that the disciplinary proceedings against Vladimir Vukša, head of the Department of Legal and General Affairs, have to do with the fact that Vukša, at his request, commented on the manner of signing acts in this service.

– This is a specific service, there are a director and two deputies here. According to the law and internal systematization, acts should not go without all three signatures, the director and two deputies, because we rotate every ten months in the position of director. When I asked Vukša to give me an explanation, because he leads the legal service, whether it is legal or not, he made an act where he wrote that no document can go outside the Service without three signatures. It seems to have been the trigger for some things to be done against him. I do not want to prejudge the disciplinary proceedings against Vukša, but some things were evident here. Despite the fact that I did not give my consent, some employments were made – says Slipac.

By the way, about 500 people are permanently employed in the Service for Joint Affairs of BiH Institutions. The annual budget of this institution is about 19 million KM, of which about seven million goes to the salaries of employees.

The number of employees in this service is constantly growing, so the auditors recorded that in 2020, when the volume of work of this service, especially in the catering services provided by institutions, was significantly reduced, and when many worked from home due to the coronavirus pandemic, in that period, this service employed five civil servants and 21 employees for an indefinite period of time through a public announcement. As many as 50 people were hired on a temporary basis in 2020, and these contracts were renewed several times after 3 months.

In the last report for this service, the auditors pointed out the weaknesses in the efficiency of public procurement procedures, which is a big problem, because this service for the needs of all state institutions besides procuring heating oil necessary for heating, procures food, beverages, and hygiene and other necessities.

At the beginning of this year, the magazine “Žurnal” wrote about Dragan Šojić’s suspicious business when they updated the story about Šojić’s plan to, in addition to the Law on Public Procurement of BiH, buy a part of the building in Istočno Sarajevo for two million KM from the company “Građenje”, for the needs of BiH institutions.